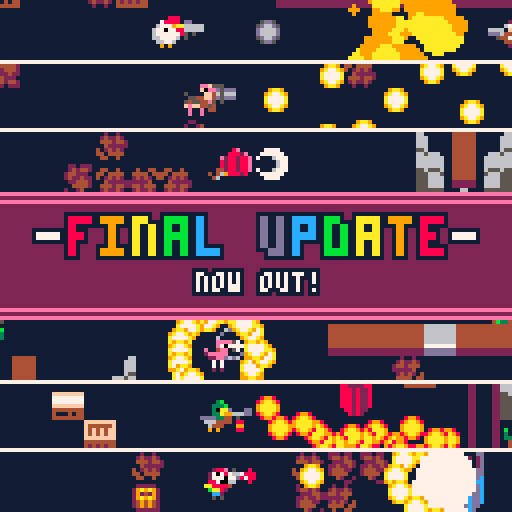 So, the final update for Birds With Guns is now out! After the release of the first update, there were areas in the game we felt were lacking, and this update attempts to address them.

First off, the exciting stuff: new guns. The original five guns (revolver, shotgun, machinegun, sniper and assault rifle) were great and suited the game well, but we couldn't help but think that it would be more fun if we added more. The designs we settled on are: bazooka, flamethrower, ring cannon, boxing glove, gatling gun and firework launcher. We tried to make each weapon not only look unique, but also play uniquely. I actually think they're more fun than the original five!

The second thing we wanted to address was the fact that every bird felt kind of the same. The only way we could feasibly fix this was by adding different stats to the players, like tweaking their speed, initial life, etc. I had some promising ideas, like a bird that starts off with low HP but has high max HP, so you could gain it back. Unfortunately there's just not enough variables to tweak to get interesting gameplay, and adding something like different abilities for players isn't feasible at all. In the end, we settled on giving each player different guns, which was nice as it at lease made each character unique.

Fun fact: Chicken is actually a direct reference to Bomb Chicken by Nitrome. It even starts with a bazooka.

Finally, while playtesting, some players asked whether the game was endless or not, which is a fair question since at that point there was no indication of how far the player has progressed into the level. We fixed this by adding a clear limit counter on top of the screen and a progress bar in the death menu, which should hopefully nudge you a bit to completion.

Finally, Simon (@ScrubSandwich at the time of writing) not only did a great job with the music, but he changed slightly the instruments to make it sound extra nice, which we didn't have the time to add in the first release. If you're reading this, Simon, you're awesome.

We had to really push the PICO-8 engine to free up some space, due to its intentional code size limitations. In the end, we just about managed to make it with 0 tokens left. Close call.

So, this marks the end of a month-long journey, and the end of my biggest game yet. Let's hope more exciting stuff awaits us in the future! This game has blown me away in every aspect of the term, and this is a pretty satisfying conclusion to this game. Thanks to every person who has played our game :).

PS: I'm working on a post-mortem, so stay tuned for that. :]

Get Birds With Guns

Mess with the Flock, you get the Glock

Great write up! I knew that the chicken was a reference to Bomb Chicken, but had no idea what weapon it started with. Thank you for the kind words and hope to see what game dev holds for you in the future! If you need me, you know where to find me :)